Why Revolve Festival Gave Us So Much Life at Coachella 2019 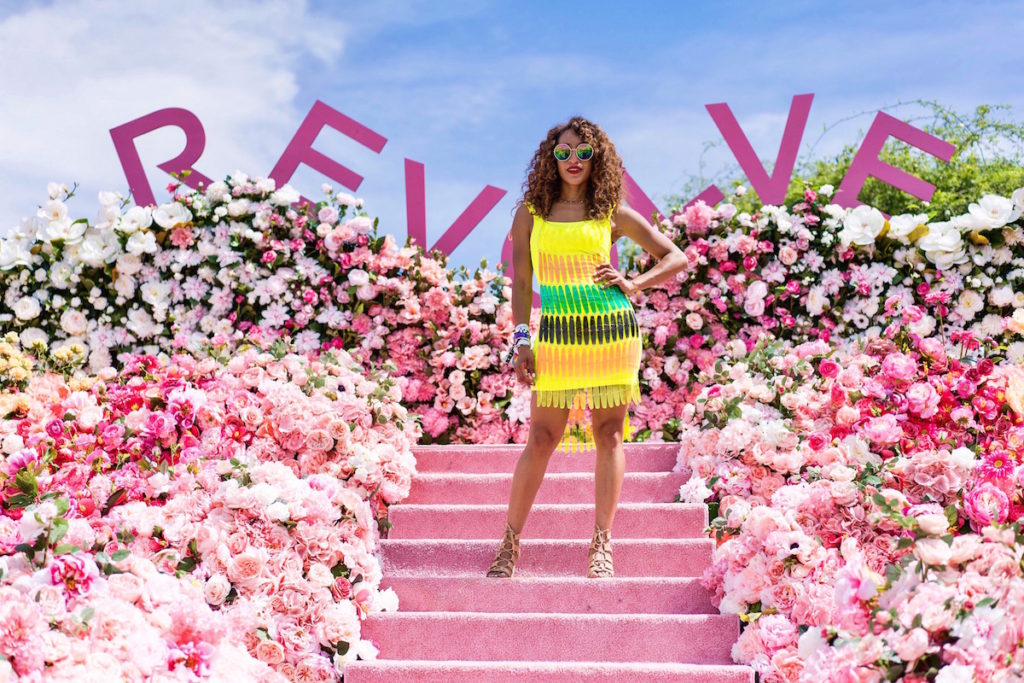 Meet the adults only, style-filled Coachella event of our dreams: Revolve Festival.

The fourth anniversary of the luxe e-retailer’s 2-day fest kicked off Saturday on a scorching hot day in the Cali desert, and it was filled with style and entertainment experiences, performances, and activations. I shuttled up to the grounds with my Coachella squad in a black party bus in a Topshop acrylic multi-colored dress and yellow tank dress, and quickly arrived. “Welcome to Revolve Festival!,” an attendant said as we stepped off the bus, giving us high fives while he was at it.

We walked straight to the entrance, strutting through colorful archway after archway, adorned with flowers and prints into a sea of Revolve Festival goers giving us fashun in mini floral dresses, netted skirts covered in rhinestones, cowboy boots and hats, and more. 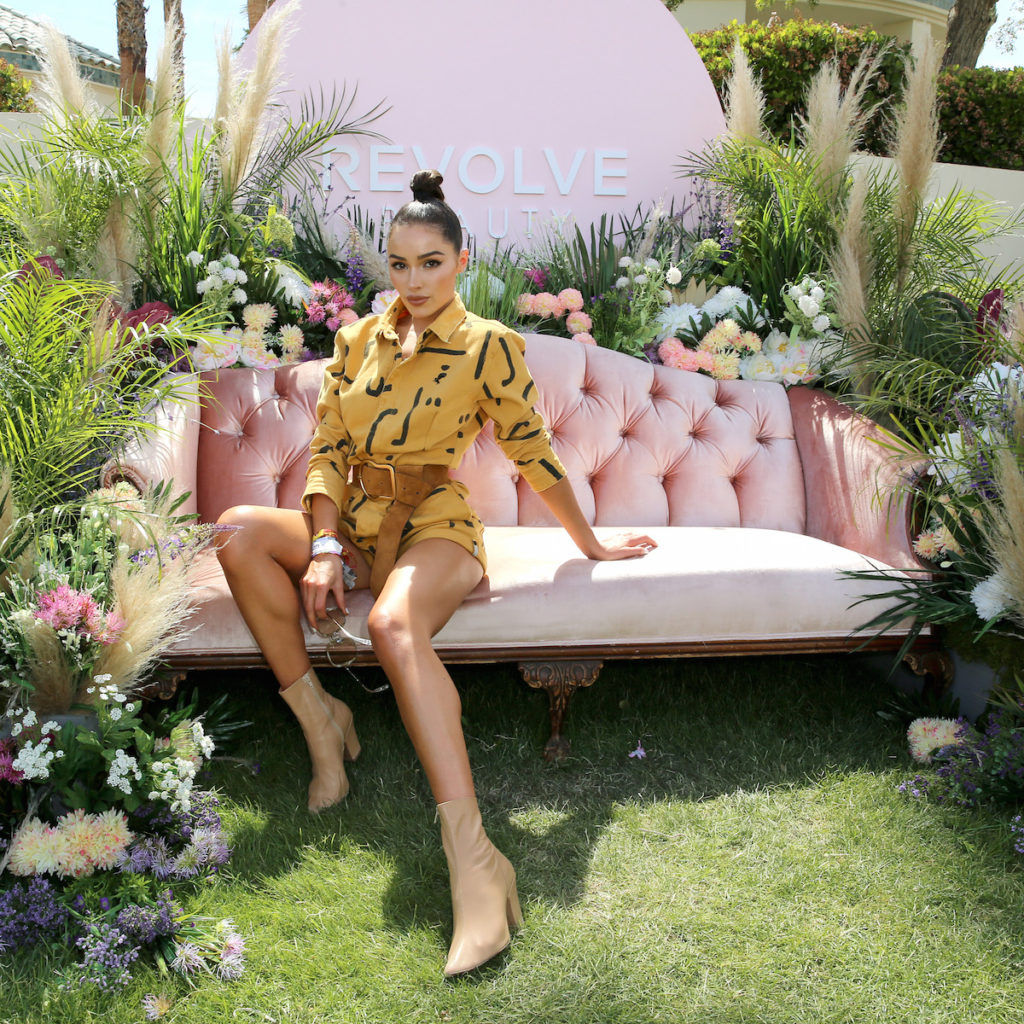 We had arrived…and when we saw the In-N-Out Burger pop-up right at the entrance in a sea of stylistas, that was when we really knew Revolve just gets us.

Take a peek at the 8 reasons Revolve Festival gave us all the life during Coachella weekend! 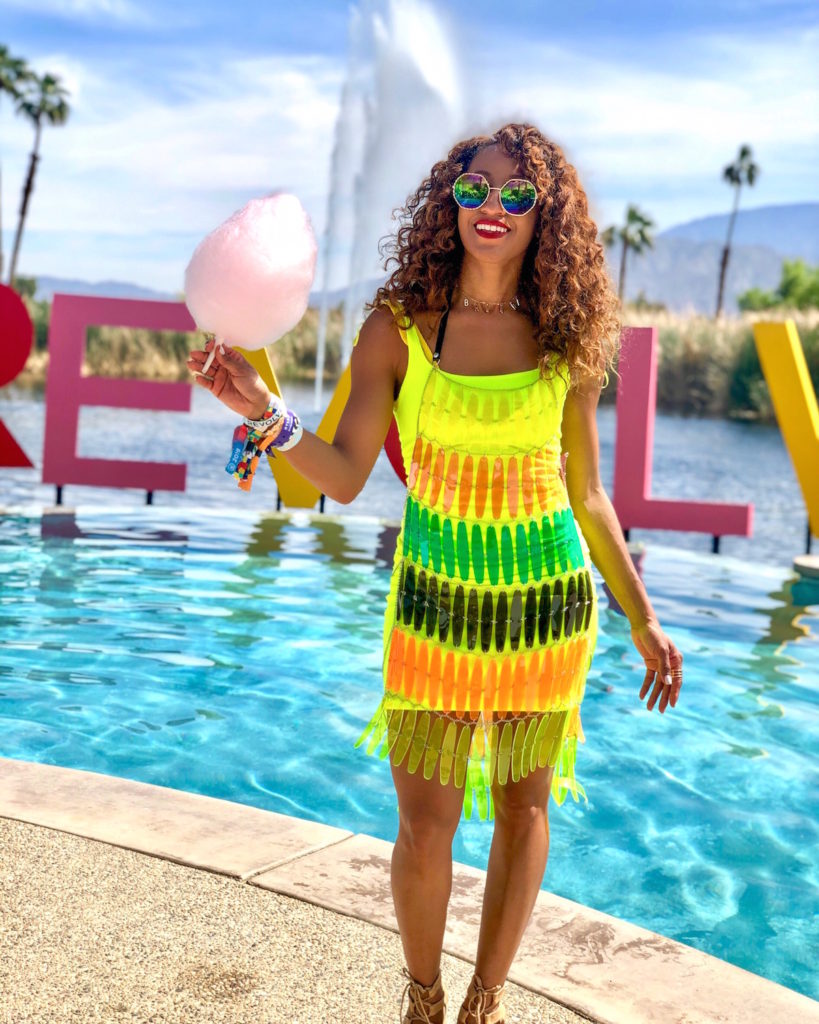 The Location: The Revolve Festival grounds were so massive that even with hundreds of people in attendance, it didn’t feel too crowded. Guests could hang out in the backyard of the massive home by the pool or anywhere in the front of the mansion, where the main stage and a ton of activations were set up. 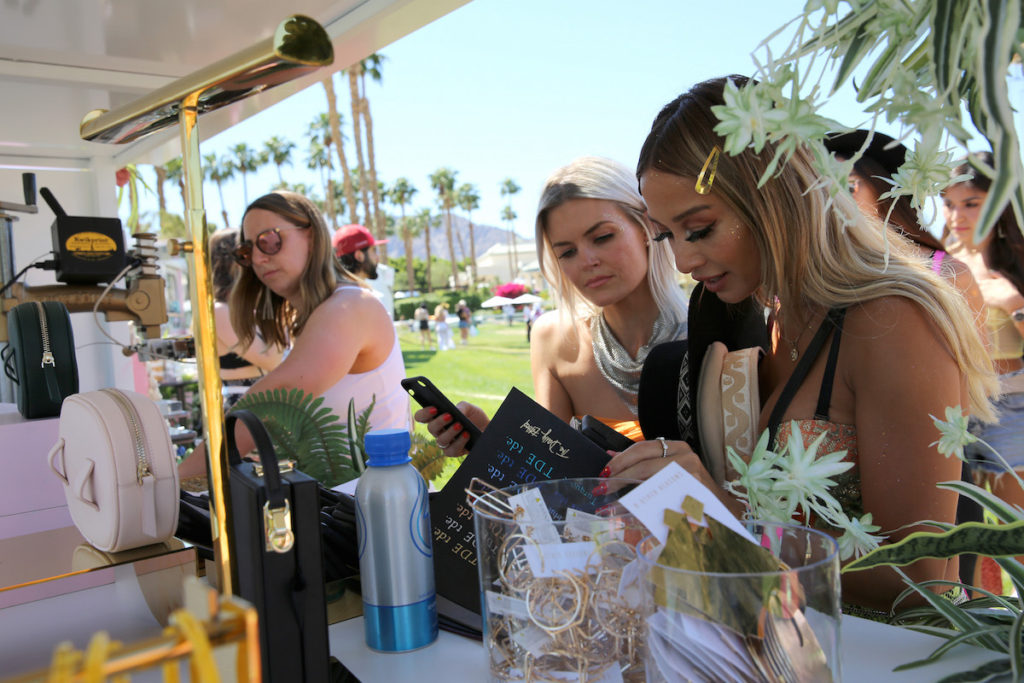 The Freebies: One of the perks of attending Revolve Festival is the free swag everyone gets to take home. We’ve made it no secret that Quay is one of our fave sunglasses brands, so when we saw that the brand returned to the fest and brought their festival collection with them, we died.  Each festival attendee got to choose one pair of shades. So, we chose a round multicolor pairs of shades that scream Coachella (and festival season). 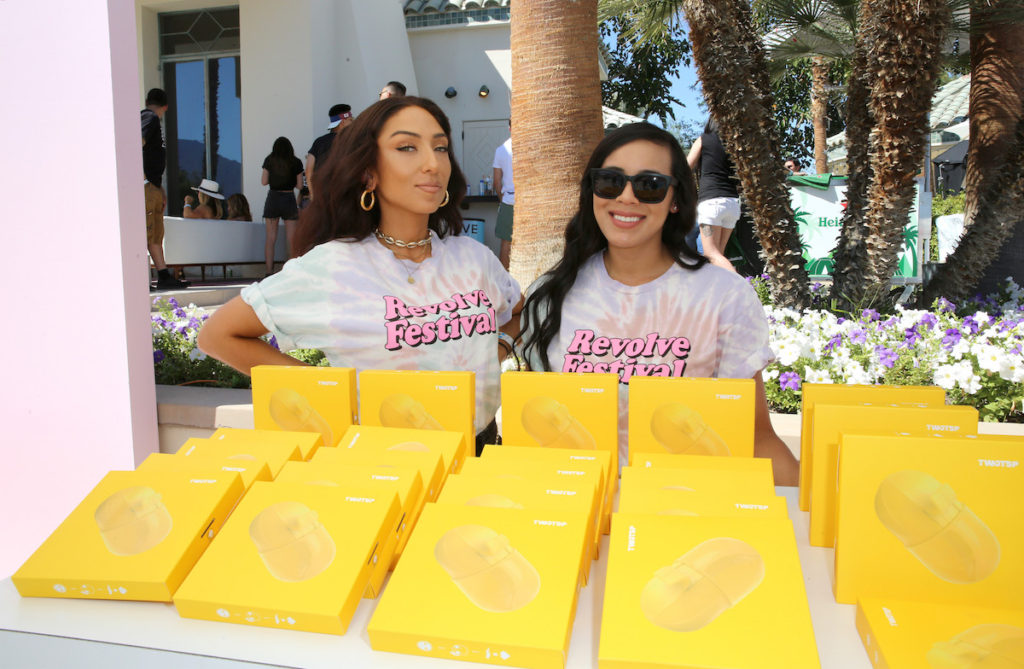 As far as the other opps to grab freebies – 8 Other Reasons treated guests to monogrammed purses, hats, and jewelry (we fell in love with a pair of bright yellow oversized hoops, and gold statement earrings), and Super Down gave out cotton candy and free Super Down crop tops, tanks, and pouches. Revolve also treated attendees to comp tie-dye festival crop tops and Revolve logo baseball caps and TWOTSP gave out facial sheet masks. 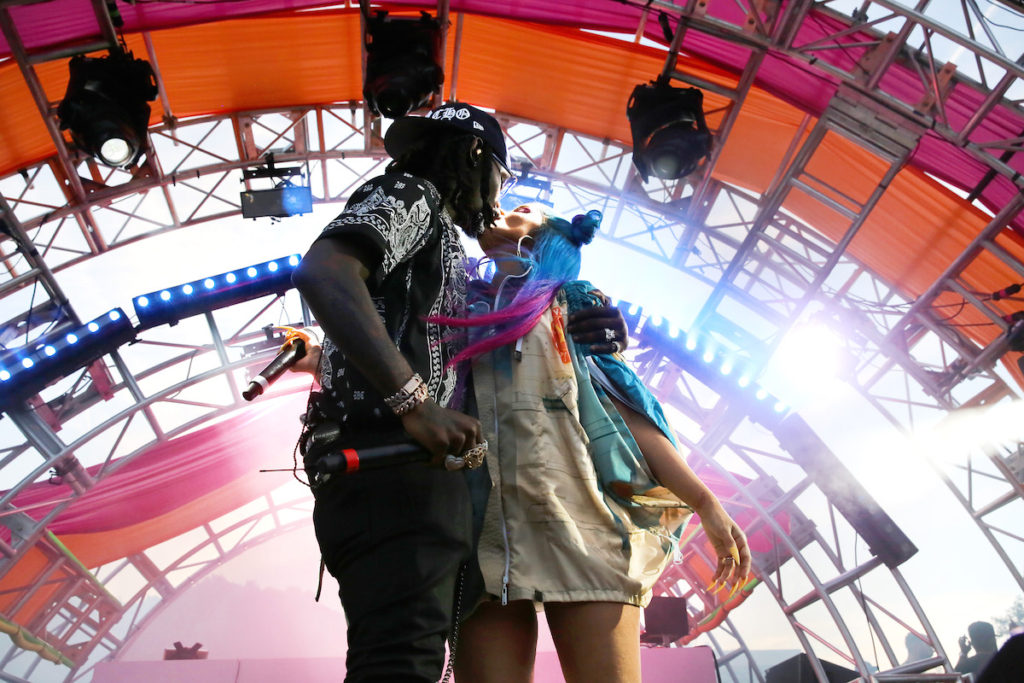 The Performances: Out of all of the performances, Cardi B, was the biggest surprise, since she was never on the schedule. The rapper surprised everyone when she popped out on stage Sunday during her husband Offset’s performance in a Louis Vuitton jacket she turned into a dress, and performed “Clout.” Per usual, she had the crowd throwing their hands up, screaming, and dancing throughout their performance.  Other than Cardi and Offset, 2 Chainz was another one of our fave performers. 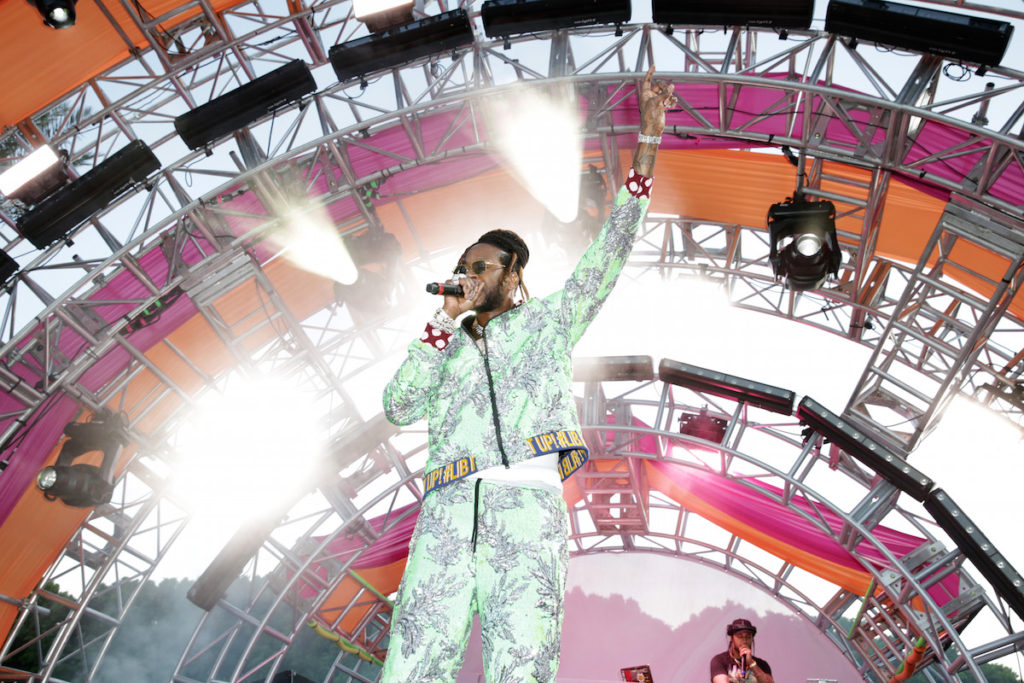 The “Rule the World” rapper performed several of his hits off of his new album Rap or Go to the League, and well as some old faves like “I’m Different.” Saweetie, Rae Sremmurd, Rich the Kid, and more also hit the stage during the two days of the fest. 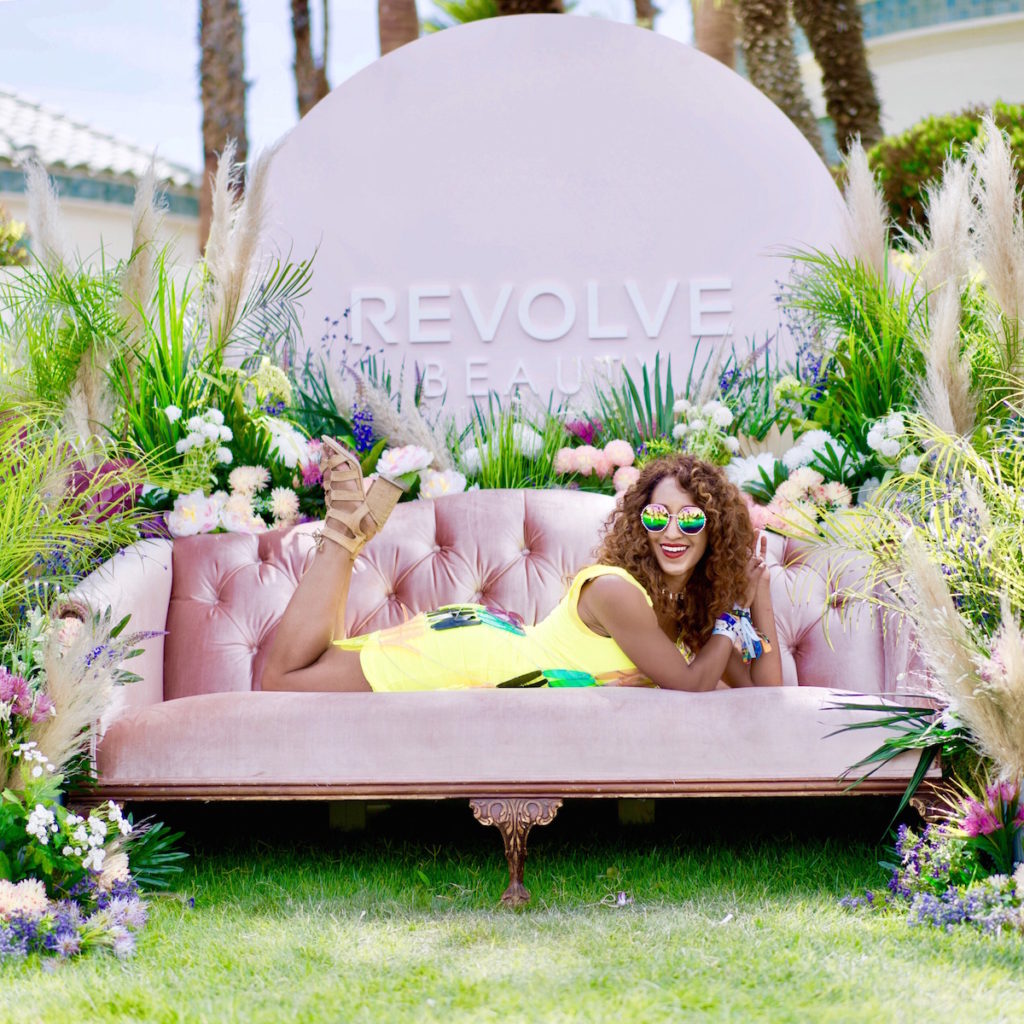 The Photo Opps: There were Instagrammable photo opps all over the mansion’s grounds – so many that it was tough to count. Our fave was a pink staircase topped with “Revolve” that was surrounded by a beautiful display of fresh colorful flowers, but there was also the walkway, with each archway around it making the perfect backdrop. There was also a Revolve bench surrounded by greenery, the pool, which had a colorful “Revolve” sign as its backdrop, and more. 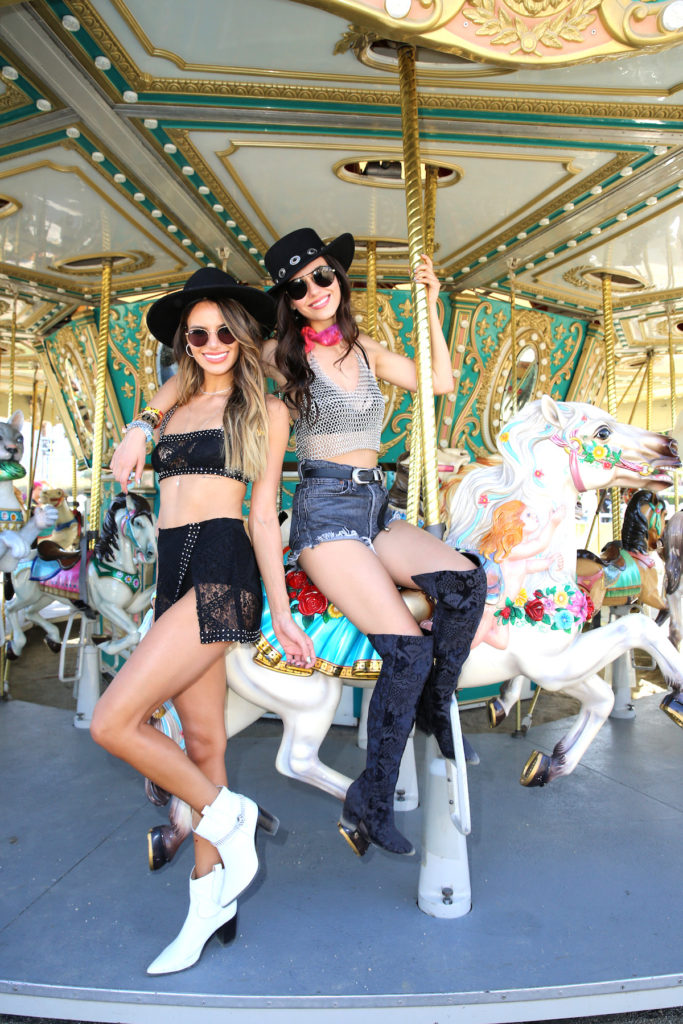 The Fashion: If you want to see the best Coachella trends, which usually dictate the top styles for the rest of festival season, go to Revolve Festival. Attendees do not play it small when it comes to their lewks for the event, snapping photos around the grounds in cowboy boots, fringe faux leather skirts, cowboy hats and fedoras, neon dresses and two-piece sets, off-the-shoulder feminine frocks and more. I switched it up the second day and wore a yellow Fashion Nova Festival dress with a yellow bodysuit underneath. 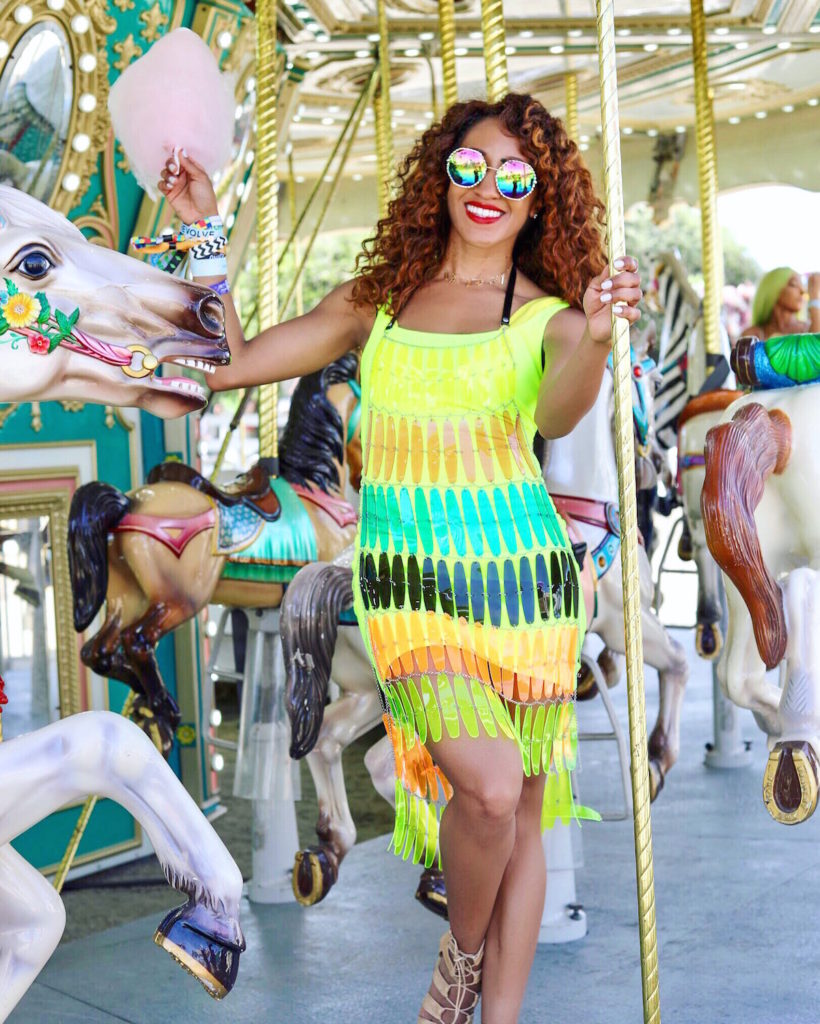 The Rides: There were only two rides on the grounds – but both have become staples at the fest – the swings and the colorful carousel. Both are a good time – and rarely had a line to ride them. 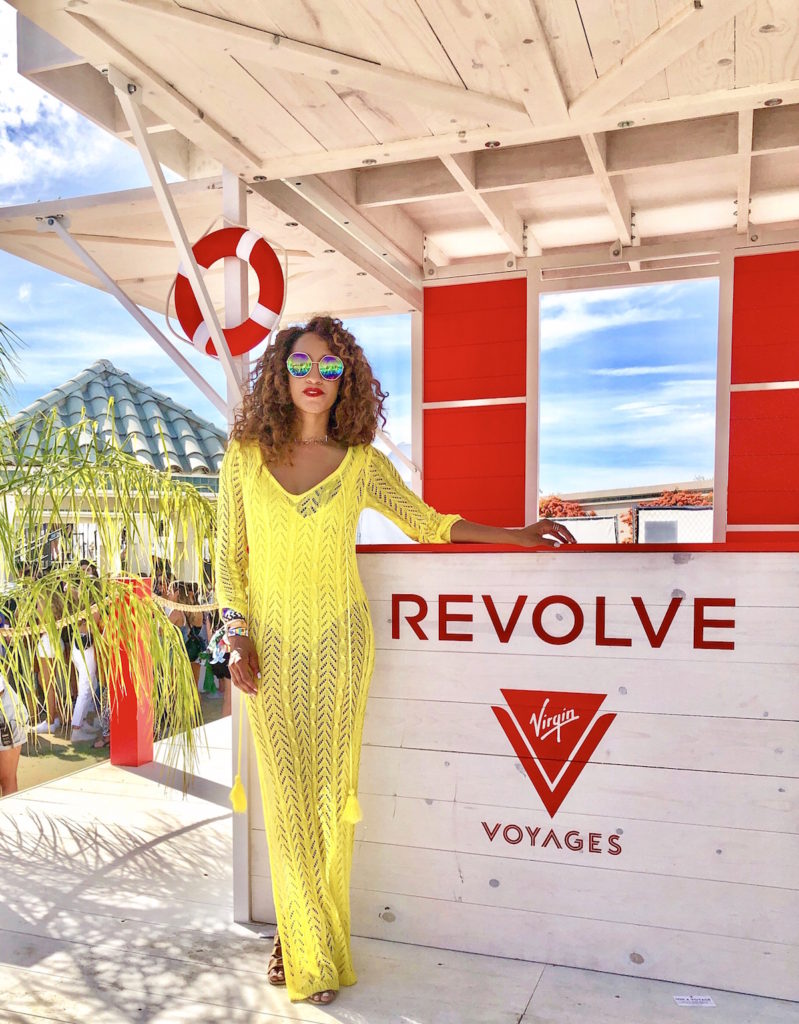 The Activations: There were so many cute activations at the fest. Pools full of swirly pink La Croix straws and coolers with icy La Croix drinks led the way to the brand’s photo station, where guests could strike poses on life-size Lacroix boxes. Nearby was one of our favorite activations – Virgin Voyages – which was souped up like a mini beach complete with white sand. Guests grabbed cocktails and champagne from the open beach bar and kicked back on white wooden loungers. 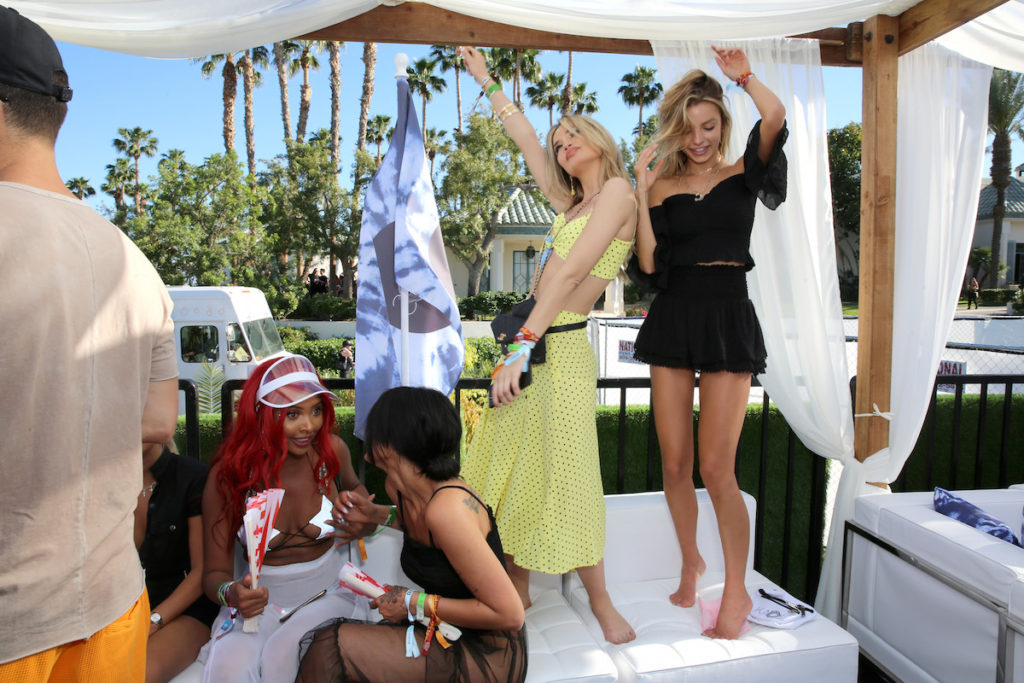 Heineken also had a cute pop-up – a convertible retro Chevy parked in front of a sea of palm trees, and festival goers hopped in and on it to snap the perfect photo. 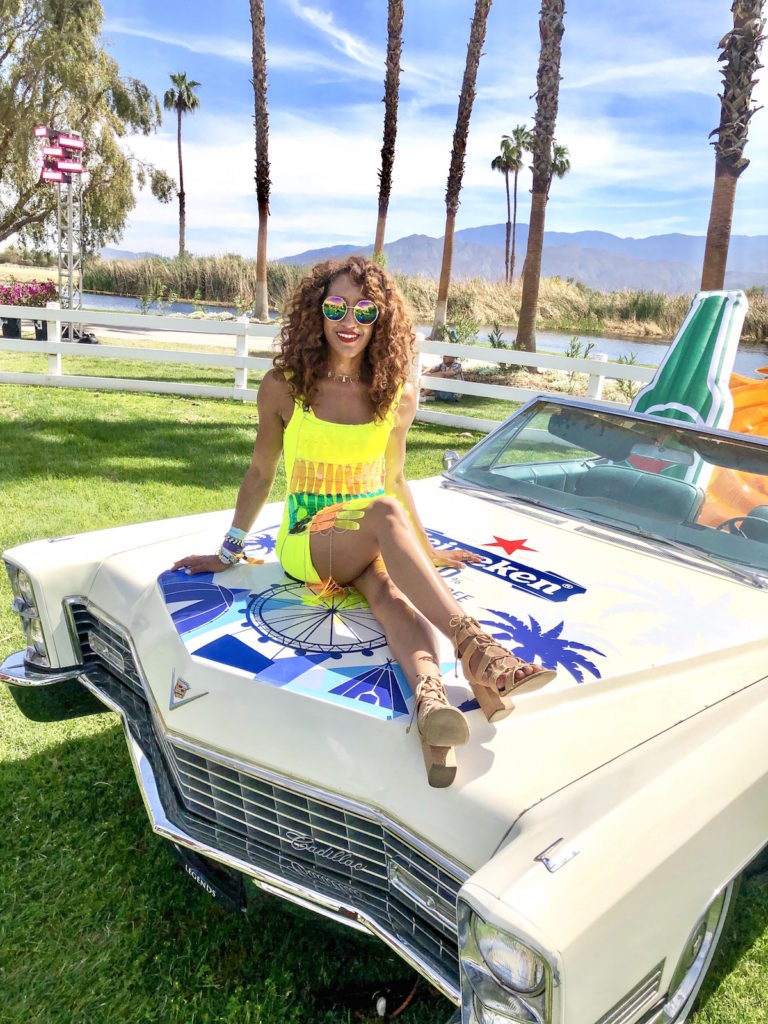 The Grub: In-and-Out aside, there was also a pop up with fried teriyaki chicken bites and fries, as well as an Uncle Paulie’s sandwich truck and refreshing tk bowls of fruit and yogurt.

Could we ask for a better festival? No. No we could not.