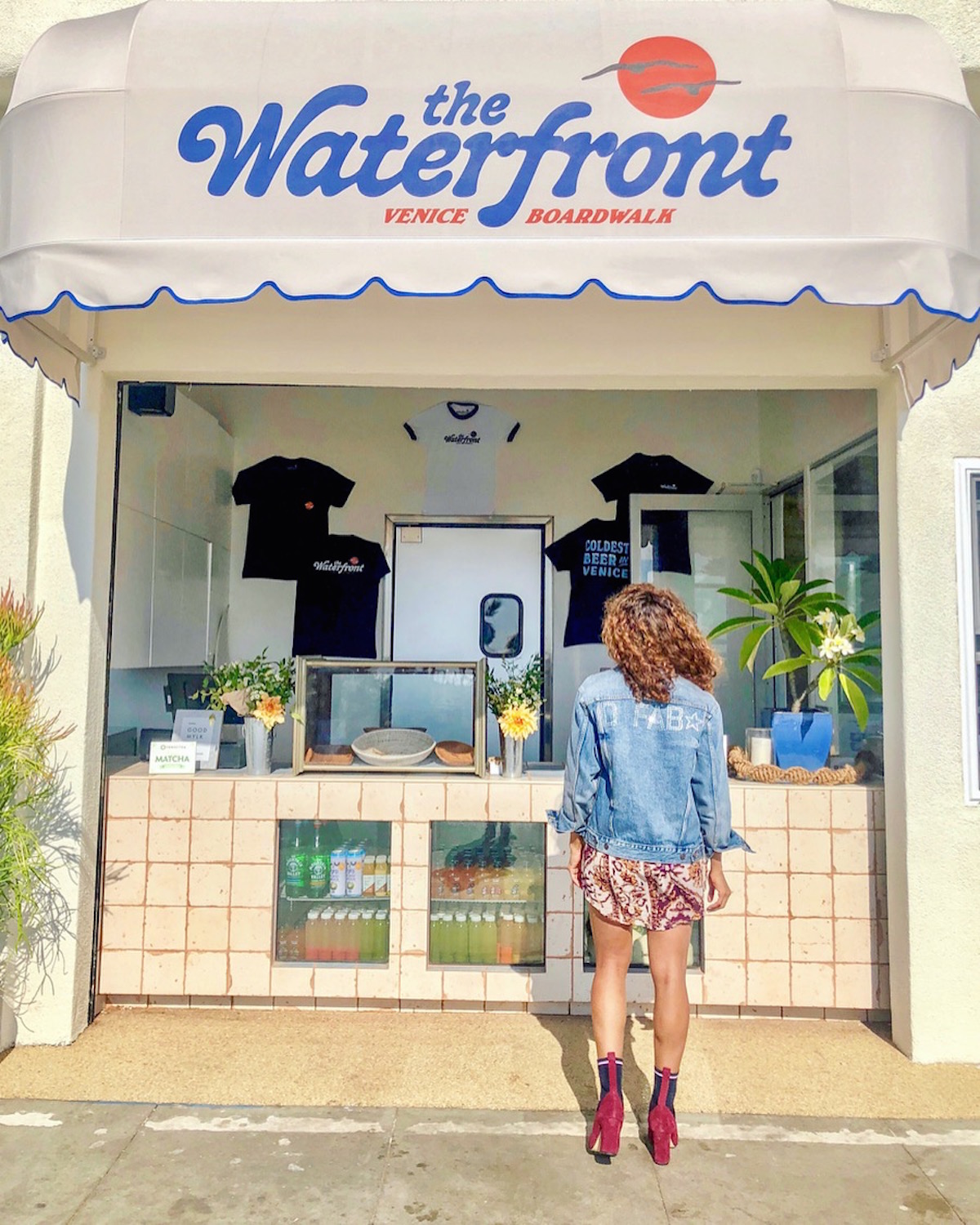 This is not your mama’s Venice Beach Boardwalk eatery.

After popping into a restaurant (that shall go unnamed) the first time I strolled along the famed boardwalk in Los Angeles, I vowed never to eat on the boardwalk again. Aside from the addictive kettle corn at Muscle Beach, I couldn’t stomach the grub, and started going to dining hotspots on nearby Abbot Kinney instead.

That is, until now. 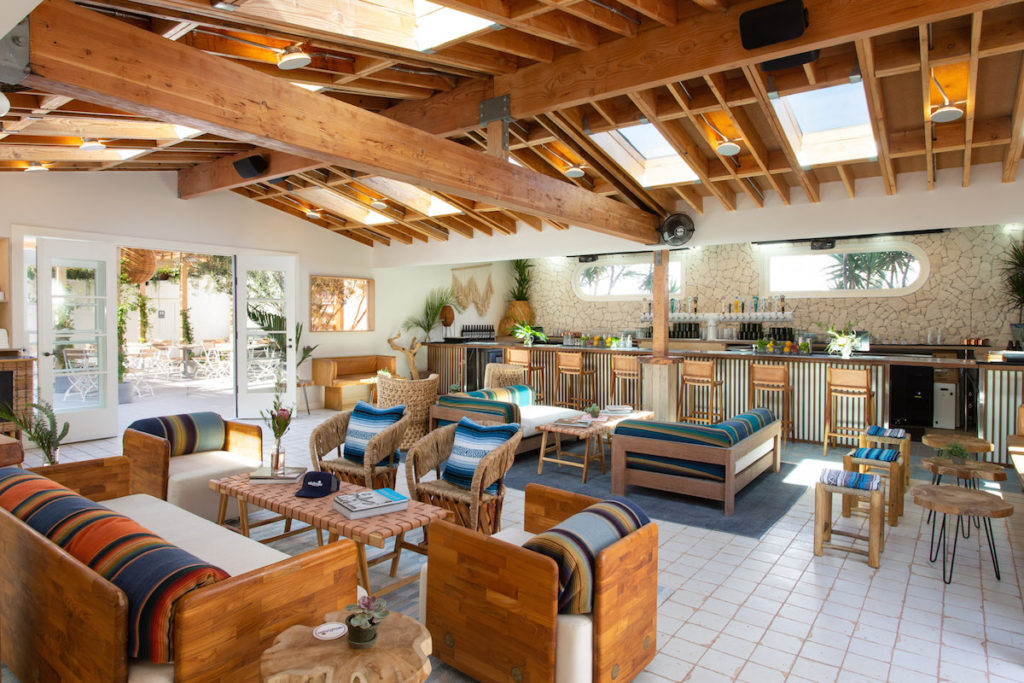 New California chic restaurant The Waterfront is changing the game for Venice boardwalk dining, and it’s unlike anything else that sits near the shore. The eatery is bright and inviting with casual island vibes thanks to its woven chairs, coastal hues, and a splash of paint on one wall that reads “Let The Good Times Roll”. It’s modern and cozy, and made for Venice beachgoers of all sorts – those who just want to pop in for a meal and others who want to spend the day there. 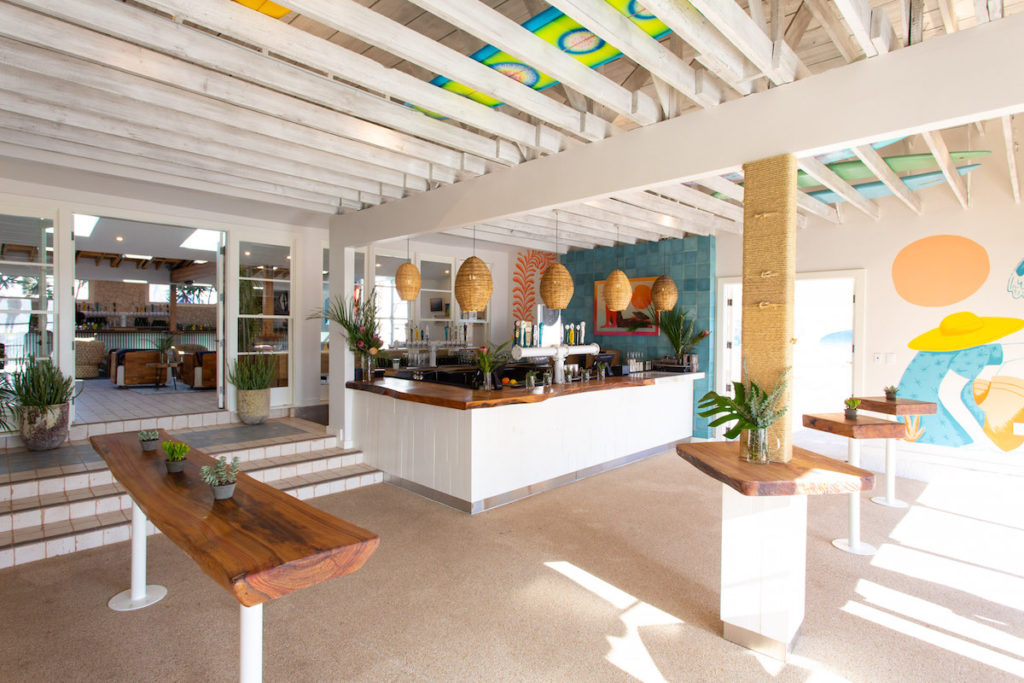 We immediately fell in love with the decor and the way the owners want to bring the community together via the serene space, but then we tried the food, and Waterfront became our new fave Venice Beach restaurant. From the huevos rancheros to the gluten-free waffle topped with maple butter and berries, we loved every single dish we tried.

Here are the five things you need to know about The Waterfront, which opens its doors today. 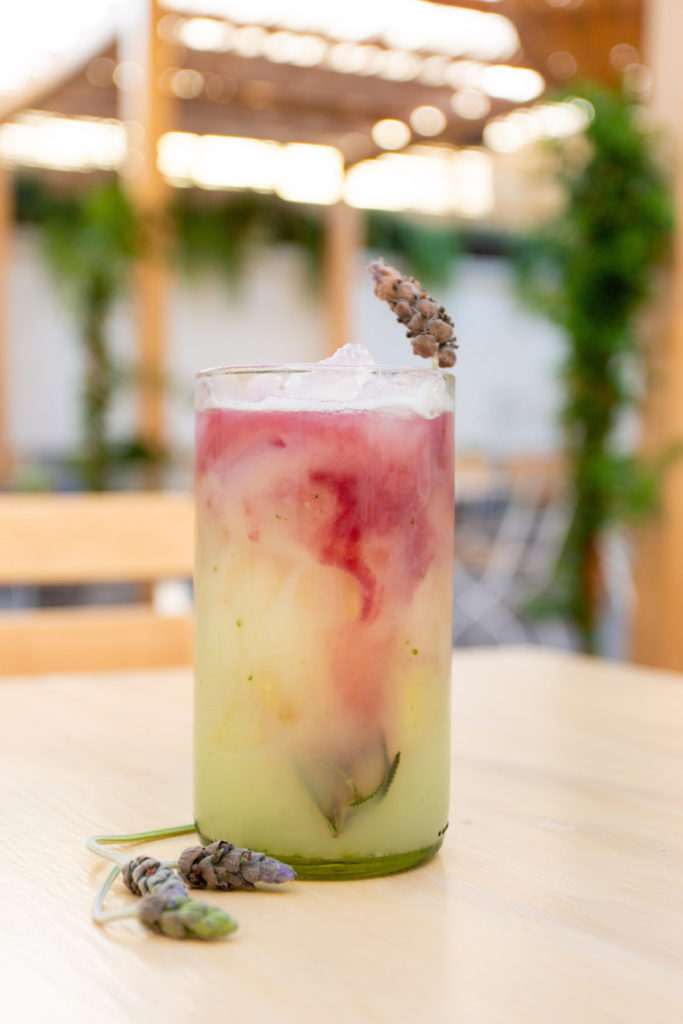 1.The Food Is Everything (and so are the cocktails): “These are going to make us famous,” one of the managers told me as she sat down a plate of breakfast tacos – It was a combo of eggs, potatoes, fried onions, and more. One bite and I believed her. The tacos were so unique and packed with flavor, just like the huevos rancheros, Waterfront burritos, and the gluten-free waffle topped with berries and maple butter we tried out. The latter was so good that we couldn’t stop spooning it even after we were stuffed. 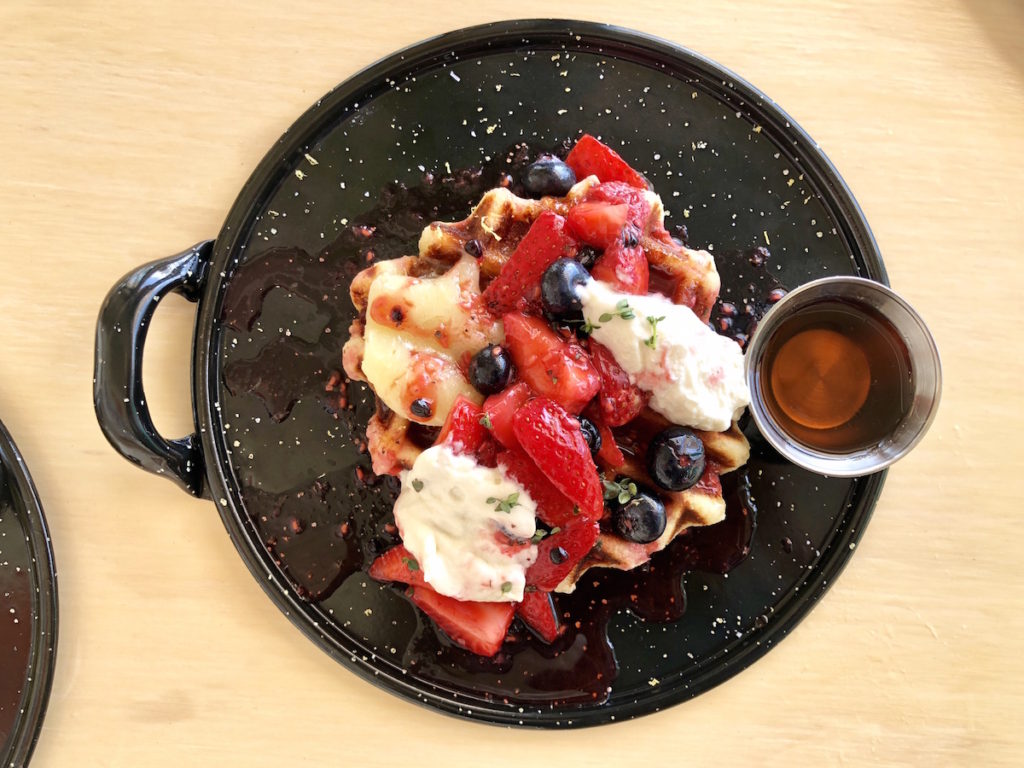 Trust us, go here for brunch (and also go back for dinner). There are a variety of dishes on the menu, and mostly all of them have eggs. Although I’m usually not a fan of runny eggs, the Waterfront made me love the way they tucked them into their dishes (see the full menu, here). 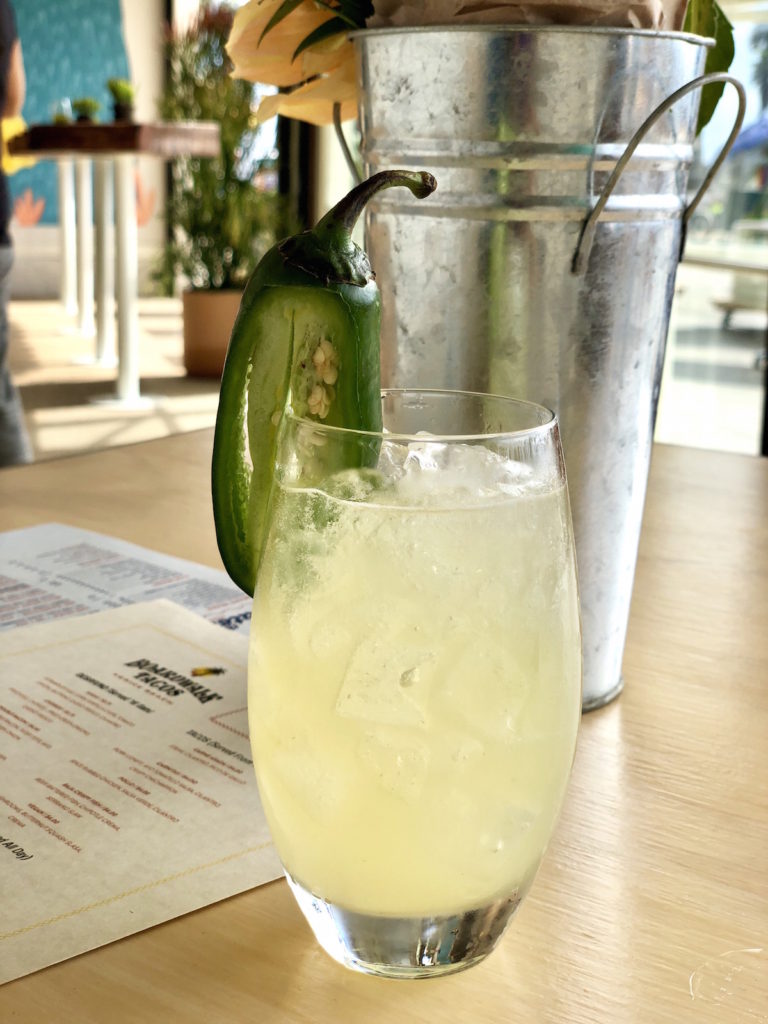 The Waterfront also has a full cocktail menu with quite a few inventive libations on it. Our fave was the spicy margarita. Don’t miss it.

2. There Is a Walk-up Taqueria and Coffee Bar: This was one of our fave things about the restaurant. You can walk right up from the beach and order tacos and lattes to go from the side-by-side coffee and taco bars. 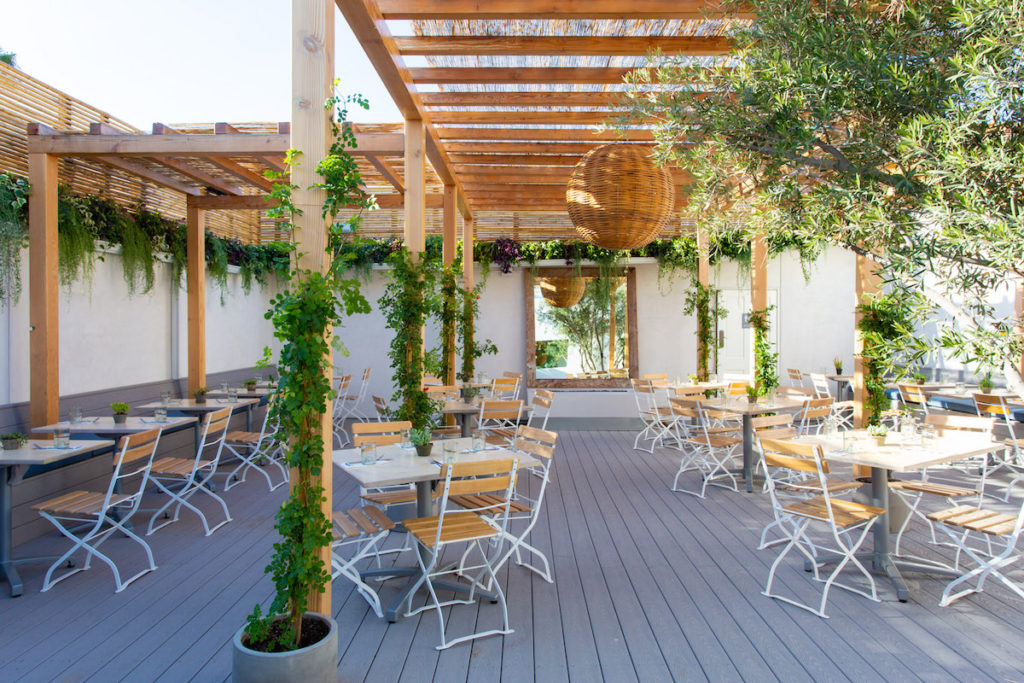 3. It’s Huge: In addition to its main dining room, which extends to the boardwalk and has two bars, there’s an outdoor patio, as well as a more intimate dining area.

4. There Is a Live Band That Plays Outside: The owners joined forces with a homeless band who used to play regularly for tips in front of the old restaurant that sat there. Now, the group will not only play there regularly, but they will also do it in Waterfront-emblazoned shirts. 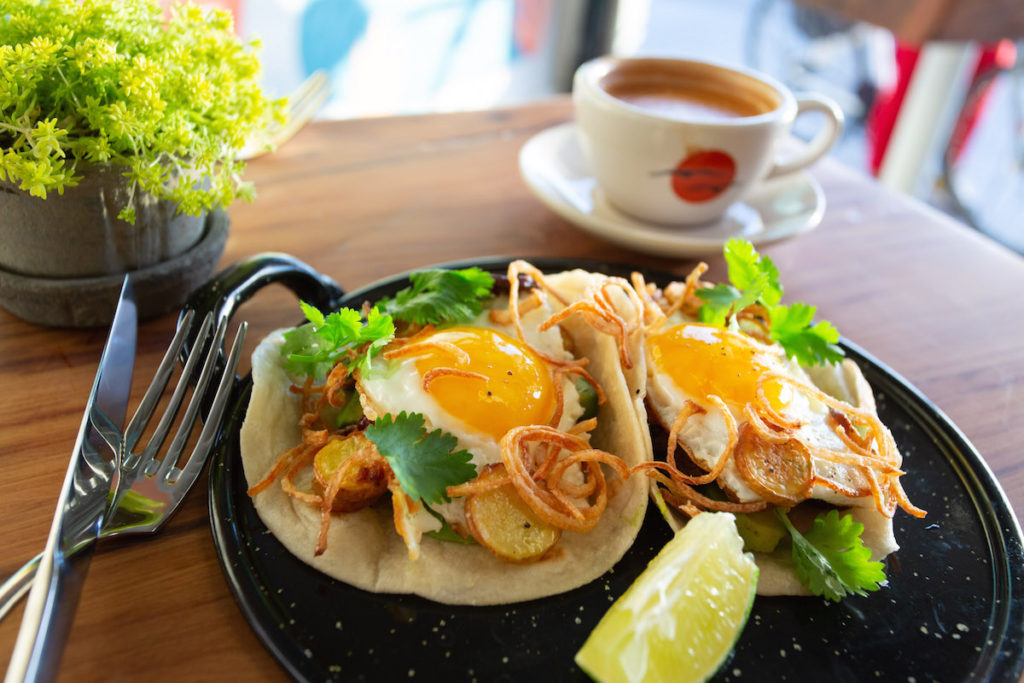 5. The Tacos Will Be a Big Deal Here: Everything we tried on the menu was so good that it was hard to stop munching on our dishes, but we have a feeling that the tacos will be the thing that takes the Waterfront to the next level (okay, maybe the berry-topped waffle too). There’s a full taco menu, and if our bites of the breakfast taco are any indication of the popularity of the rest of the taco menu, it’s going to be addictive.