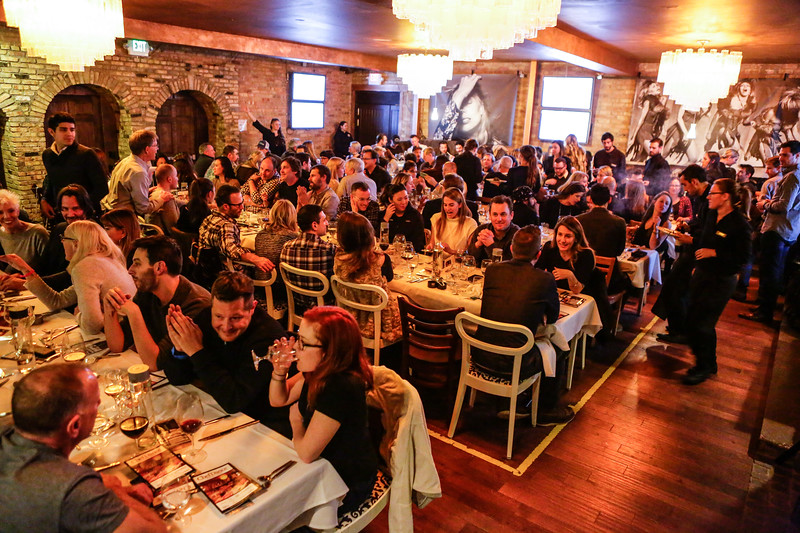 Believe it or not, having a blast at the Sundance Film Festival isn’t just about film-hopping. It’s also about experiencing all of the events the scene has to offer. From Chefdance to the action-packed WanderLuxxe House to the Tao nightclub pop-up, we’ve got all the details on the biggest bashes and events of the weekend (Brace yourselves, it’s a long list, but worth the read).

1. Chefdance: We love this exclusive, dinner series, founded by Kenny Griswold and Mimi Kim, that kicks off at 7:30 p.m. with a cocktail hour and flows into a chic, intimate dining space at the bottom of Park City Live until 10:30 p.m.. After a bit of mixing and mingling, there is a world renowned chef each night that whips up a 3-course meal. Last year, Chefdance fed over 200 Sundance goers every night, but still managed to make it feel like an intimate dinner with friends. 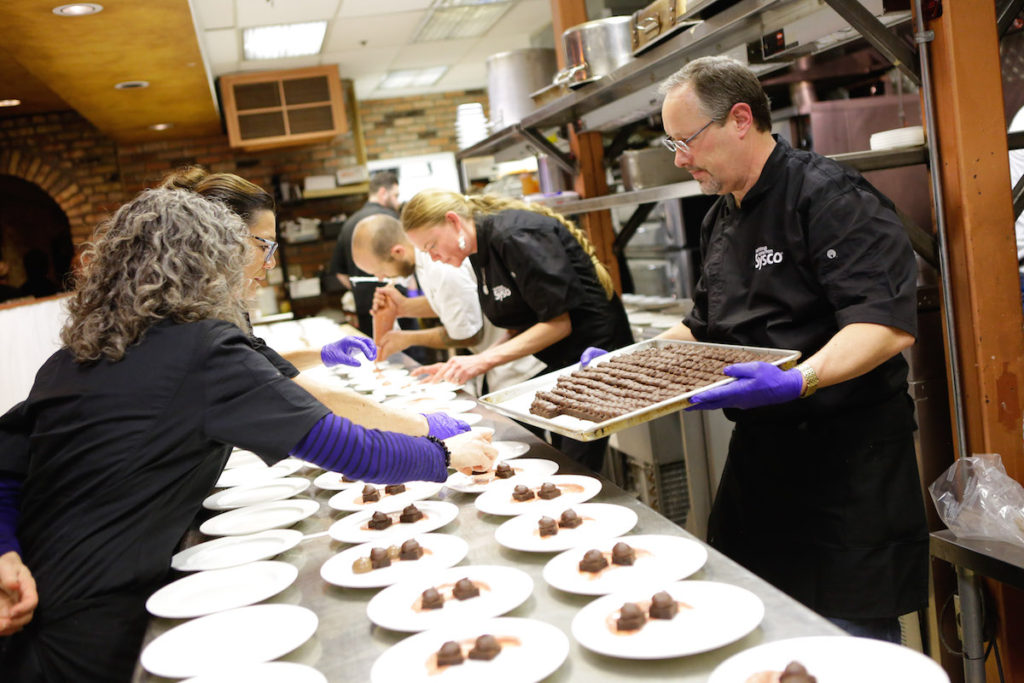 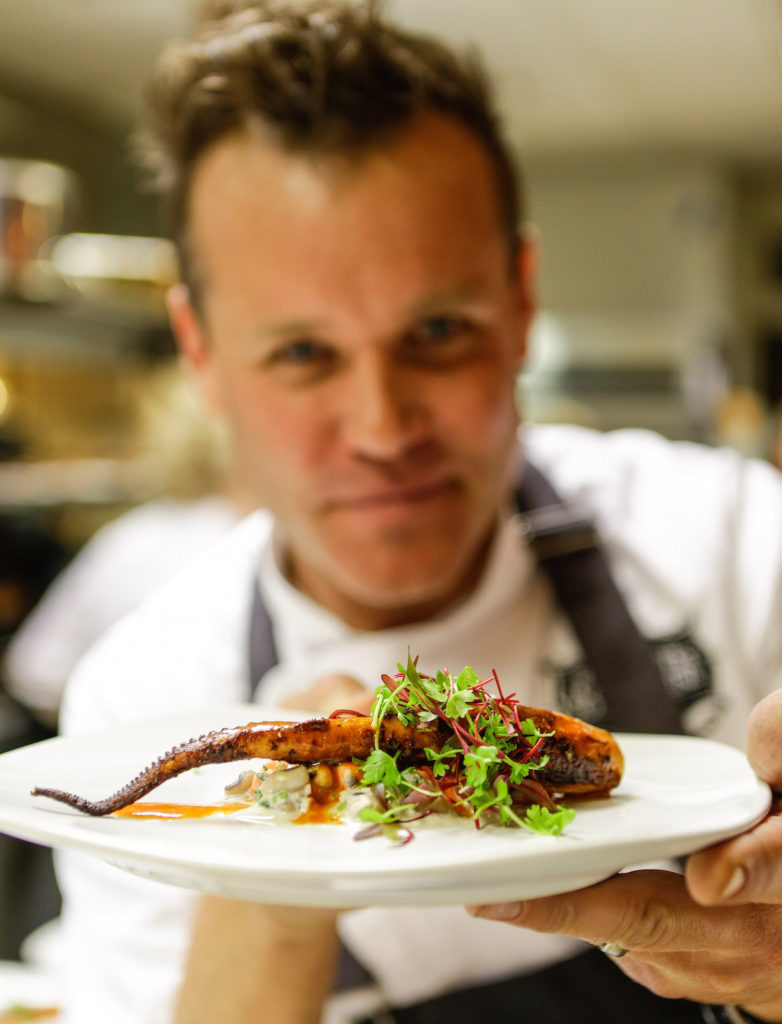 What to Expect: Last year, we were on hand as Malarkey served up a first course of apple, celery root and fennel with housemade ricotta and charred scallion, a second course of buffalo ranch octopus with black eyed peas, and a third course of slow roasted chuck steak. For dessert, we nibbled on chocolate cremeux – a chocolate almond cake topped with cherry curd and candied cocoa nibs.

If you didn’t get an invite to Chefdance this year, all is not lost. You can buy tickets, right here. 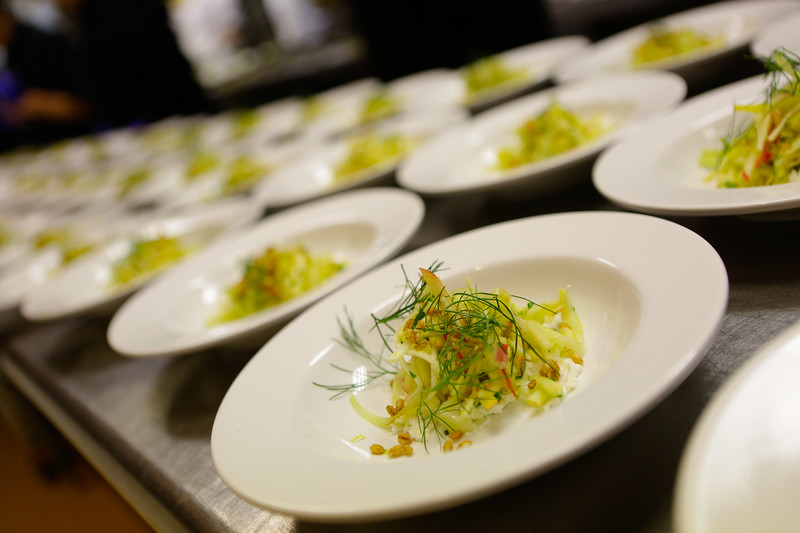 2. WanderLuxxe House 2018: The luxe concierge service founded by film industry veterans Marti Hines and Lola Wood is back at Sundance – and we are pumped. This go-round they’re teaming up with Tesla, Heineken, Remy Martin and AVEENO, and more for a weekend full of exciting activations, and lucky guests will transported to them by Tesla vehicles and Lyft rides.

Incredible actors Jack Huston and Garrett Hedlund also made an appearance at the luxurious google home event at Sundance 2017. Who will pop into the Wanderluxxe house this year? Wait and see! #wanderluxxewithus #sundance2018 #actorslife #redcarpet #celebrity #specialevents #luxurylife #luxurylifestyle #friday

What to Expect: The WanderLuxxe House: Presented by Variety magazine, the house will host film premiere parties, panels, performances and events, including a Mandy after party presented by OTTLending with stars Nicolas Cage and Elijah Wood all in tow, and an after party for A BOY, A GIRL, A DREAM, with stars Omari Hardwick, Meagan Good, and Jay Ellis on hand as well.

Common and Friends: On Jan. 22, there will be a night of private performances led by Common, with surprise guests scheduled to join in the evening. As a bonus, there will also be a midnight snack delivery by Postmates. 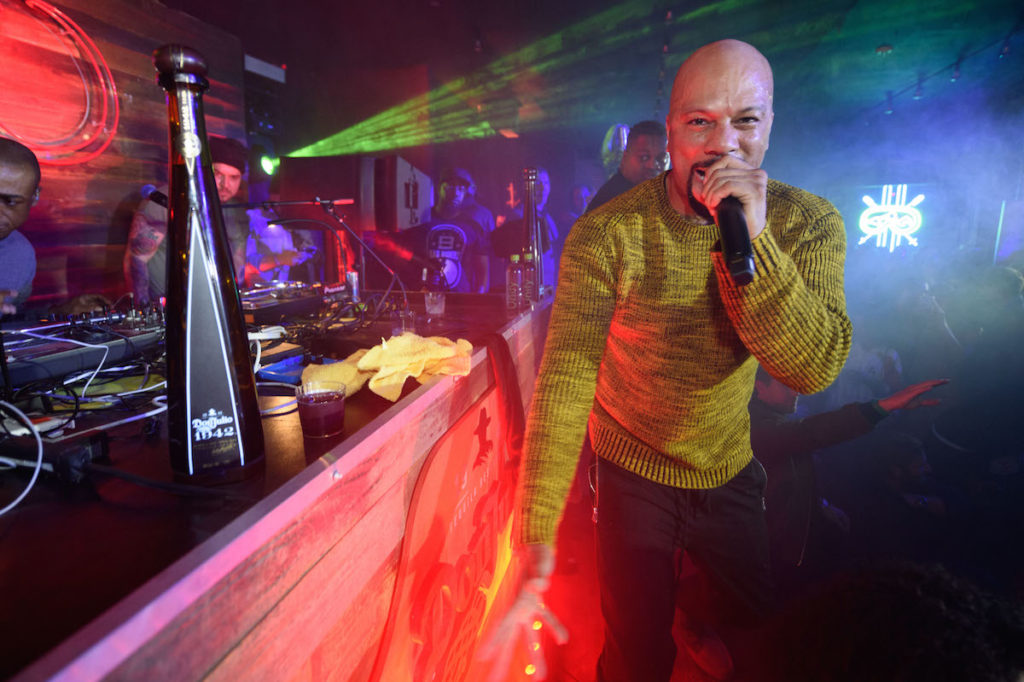 Fitness Classes: SoulCycle and East Side Dance Co. Fitness classes will be held Jan. 20th-22nd at 10am daily, with an additional 9am class on Jan. 23rd. The dance classes will include hip hop dance, floor work and core exercises. Following each class, there will be guided meditation sessions courtesy of AVEENO. Guests will also be treated to an AVEENO® radiance-boosting facial massage featuring the brand’s award-winning Positively Radiant® products.

3. The Epic Tao Pop-Up: This is one of my favorite nighttime activities at Sundance. It’s a pop-up Tao nightclub, but you can wear snow boots and still get in (if you’re on the list). This is the 10th year TAO Group is bringing its TAO Park City to the fest. Located at The Yard, TAO Park City will be bigger than ever this year with its three-night pop-up from Friday January 19th – 21st with DJ sets by Mel DeBarge, the Deux Twins, Vice and DJ Politik. Tequila Don Julio will be serving up Don Julio 1942 for the third year in a row, and Tinder will activate a heated outdoor lounge so VIPs can escape from the cold. That will be clutch while you’re waiting on your Uber to arrive. 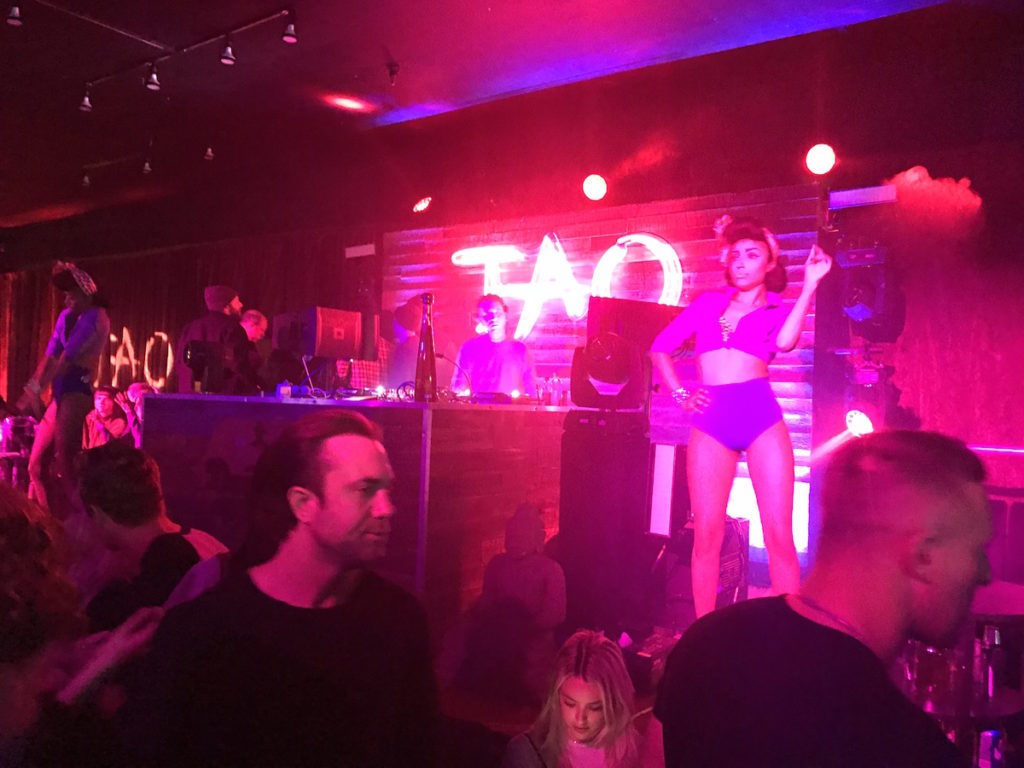 What to Expect: A star-studded party in snow boots. Last year, we indulged in complimentary Don Julio 1942 cocktails and hit the dance floor as the three DJs (a different crew each night) spun hip hop and top 40 hits. On the second night of the pop-up – Saturday – Common even hit the stage for a surprise performance, and John Legend, Jeremy Renner, and Mary J. Blige were all there to enjoy it too.

As a heads up, the line is always crazy at this one, so get there early or you may not get in. If you don’t have a ticket, aren’t on the list, don’t have a hookup, or aren’t besties with the door people though, I would stay away from this one unless you want to buy a table.

4. The Jetsmarter Music in Film Summit at Park City Live: This film summit has the best of both worlds. During the day from Jan. 19th – Jan. 21st, there will be panels led by actors, filmmakers, and influencers about the modern day film industry, climate of today in Hollywood, and the power of film women and diversity. At night, the Snowfest concert series returns with performances by Post Malone, Malone, Kaskade, Marshmello and Diplo.

What to Expect: Panelists at the summit include Nicolas Cage, Elijah Wood, Will.i.am, apl.de.ap, Dan Reynolds (Imagine Dragons) and many more. There will also be a Juul Lounge and a Smash Mallow Smash and Sip cafe on hand. At night, Park City Live turns into a concert where attendees dance at party the night away and VIPs sip cocktails from an open bar. You can buy tickets to the concerts, here.

5. Kia Supper Suite Series: This is a 3-day pop-up held from Jan. 20 – Jan. 22 that A-List Communications produces annually…and we’re totally obsessed. Each event celebrates one highly-anticipated film at Sundance, and VIP guests are whisked to and from the events in a fleet of chauffeur-driven Kia vehicles. Once they arrive, they’re treated to three-course dinners and gourmet canapé cocktail parties helmed by award-winning Chef John Murcko at the famed Mustang restaurant.

What to expect: This year’s event will include cocktail parties for Nancy, staring Steve Buscemi and Ann Dowd, and dinner parties including “A Dinner for Change,Celebrating: Masters of the Sun” hosted by will.i.am, The Black Eyed Peas, Rosario Dawson and more Friday night. Saturday, there will be an early dinner celebrating Piercing, Damsel and Tyrel with Mia Wasikowska, Christopher Abbot, and more on hand.  The Creative Coalition’s annual Spotlight Awards Dinner Gala honoring Chloe Moretz will take place Sunday. 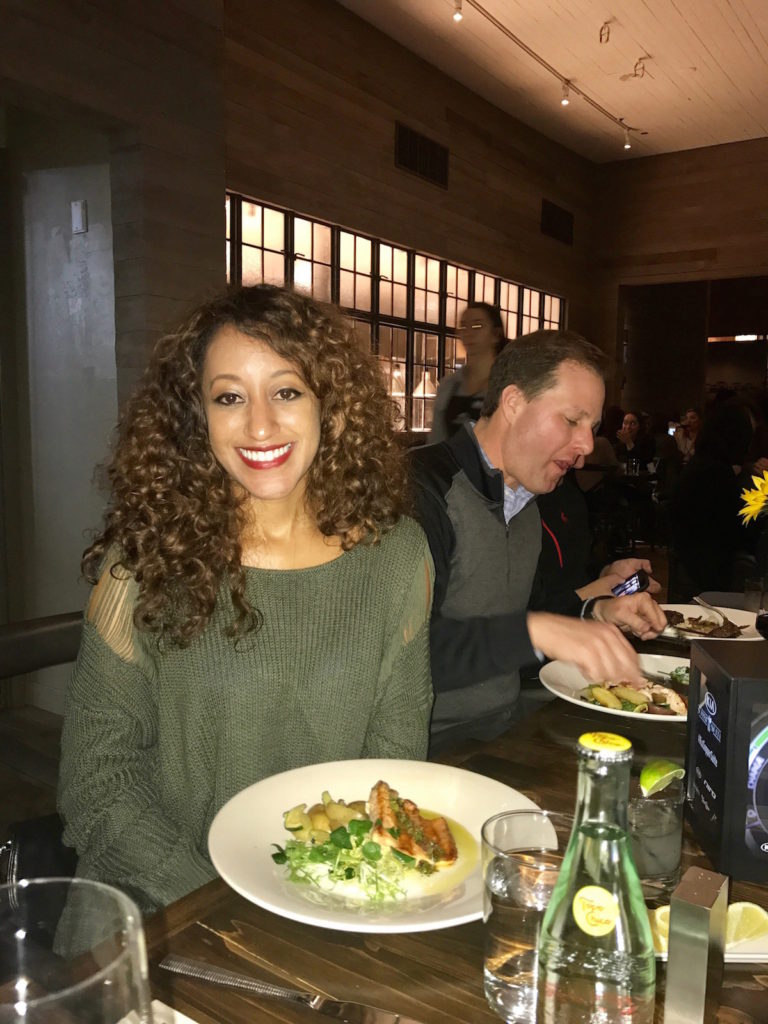 Last year, I stopped by for the Sidney Hall cast dinner and feasted on a meal that made me want to sing. The film’s stars, including Elle Fanning and Michelle Monaghan, were on hand to munch with us on Ember Roasted Cauliflower Salad, Oak Roasted Salmon, and  chocolate caramel tarts plated with spiced caramel corn, vanilla gelato, and sea salt.

6. The Music Lodge: In addition to portrait and video studios, the Music Lodge (held at 738 Main Street) returns with a check-in counter’ courtesy of JetSuiteX, a semi-private charter air carrier, which will print ticket vouchers for future use. For everyone who posts a photo, JetSuiteX will donate a seat to Angel Flight West, which transports underprivileged children to surgery.

What to Expect: A flight attendant will serve refreshments down the aisles of the lounge, and there will also be a Hot Chocolate Bar courtesy of Spyder, who will also gift their coveted skiwear. Terra will be provide aromatherapy samples, Two Gypsea Souls will gift music-themed apparel, and MY/Mo Mochi will be serving up its mochi bites.

What to Expect: Good music, a chill vibe, and a warm place to hang out and mix and mingle.  There will also be a special CMA Songwriter Series lineup on January 25 and 26 that will include new Big Loud Records artist Jillian Jacqueline and award-winning songwriters, Steven Lee Olsen and Tenille Townes.

A mighty sound emanates from @atcmusic at the #Sundance #ascapmusiccafe